We are a Midwest-based women-owned law firm for trailblazers leading the way in America. We work for visionaries who take action. We give leaders the freedom to focus on what’s worth it. We help protect what you work hard for and get what you deserve. As attorneys we are committed to stand for what’s right. Together we are agents of change making a difference for people.

In May 2009, GLF first opened…moved to Suite 200 10 months later….tripling the original square footage and team members in one year.

The next year in 2013, the firm opened a new office in Sioux Falls, South Dakota and expanded its Sioux City team by three members and successfully opened the Goosmann Trust Law Counsel, a boutique estate and business succession planning department within the full service law firm. Shortly after the expansion to Sioux Falls, Jeana began recording The Law Review on both Sioux City KTIV and Sioux Falls KEOLAND. In the firm’s fifth year, the team had done over a billion dollars in deals with a total of fifteen members including attorney and non-attorney staff.

In 2015 the firm became certified by Women Business Enterprise National Council (WBENC) and the National Association of Minority and Women-Owned Law Firms (NAMWOLF). In addition, the team continued to grow by hiring seven new employees. In 2016, the firm grew its paralegal team from two to six, totaling the GLF team to 25 members. The firm has continued to grow and has done over 2 billion dollars in deals.

In 2017, the firm was voted “#1 Law Firm in Siouxland” by the Sioux City Journal’s Weekender, and officially opened its Omaha office, continuing to expand up and down the I-29 corridor. Goosmann Law Firm had its biggest year of team growth yet and was named one of the top fastest growing law firms in the United States by the Law Firm 500 Award. Along with the firm’s expanding team, the firm purchased and renovated a historic building on 501 Douglas Street in Downtown Sioux City. The building became a canvas to artist Martin Ron who painted a mural of a giant buffalo on the side of the building. Their administrative team occupies “The 501”. In addition to the 501, the firm purchased a lot in Sioux Falls, South Dakota on South Minnesota Avenue to begin the design, development, and construction of the firm’s new Sioux Falls building.

In 2018, Goosmann Law Firm was named one of the top fastest growing law firms in the United States by the Law Firm 500 Award for the second year in a row. This year, the firm grew from 40 to 55 team members. To account for the growth, the firm renovated and expanded their Omaha office space.

It was a big year for the firm! In May, the Goosmann Law Firm turned 10! The Sioux Falls office moved into a beautiful new space at the Prairie Hills Galleria in July. In August, the Goosmann Law Firm was the presenting sponsor of the inaugural BE WORTH IT conference. In October, the firm was named one of the Top Fastest Growing Law Firms in the US by Law Firm 500 for the 3rd year running!

In 2020, despite the COVID-19 pandemic, Goosmann Law Firm was named on the Law Firm 500 Award Honoree for as one of the top fastest growing law firms in the US. This is the fourth consecutive year we received this award! The firm expanded its real estate closing services to Okoboji. In February, we started our first ever podcast called Law Talk With the Flock.

Having left an established 100-year-old law firm, Jeana Goosmann had a vision and defied the risks of starting her own firm. Initially, Jeana had enough work to hire multiple attorneys, however, she opted to hire only one lawyer and an assistant. Then came the rebranding, which she refers to as one of her best investments to date. This rebranding decision helped to define Goosmann Law Firm and what it was about, attracting clients and team members. As a result, Jeana hired up to seven attorneys and eight non-attorney staff just five years later.

Jeana’s priority has been about creating a firm culture centered around Midwest values, big city style, hometown service, team-approach, and keeping up with the pace of business. Now having grown to four locations in the Midwest, Sioux City, Sioux Falls, Omaha, and Spirit Lake, Jeana continues to grow the firm without plans of stopping anytime soon. She says, "With a business mindset, hiring and promoting the right people, developing a strong professional culture, and capturing hot markets, I have been able to beat the odds, defy the risks, and watch my firm grow." 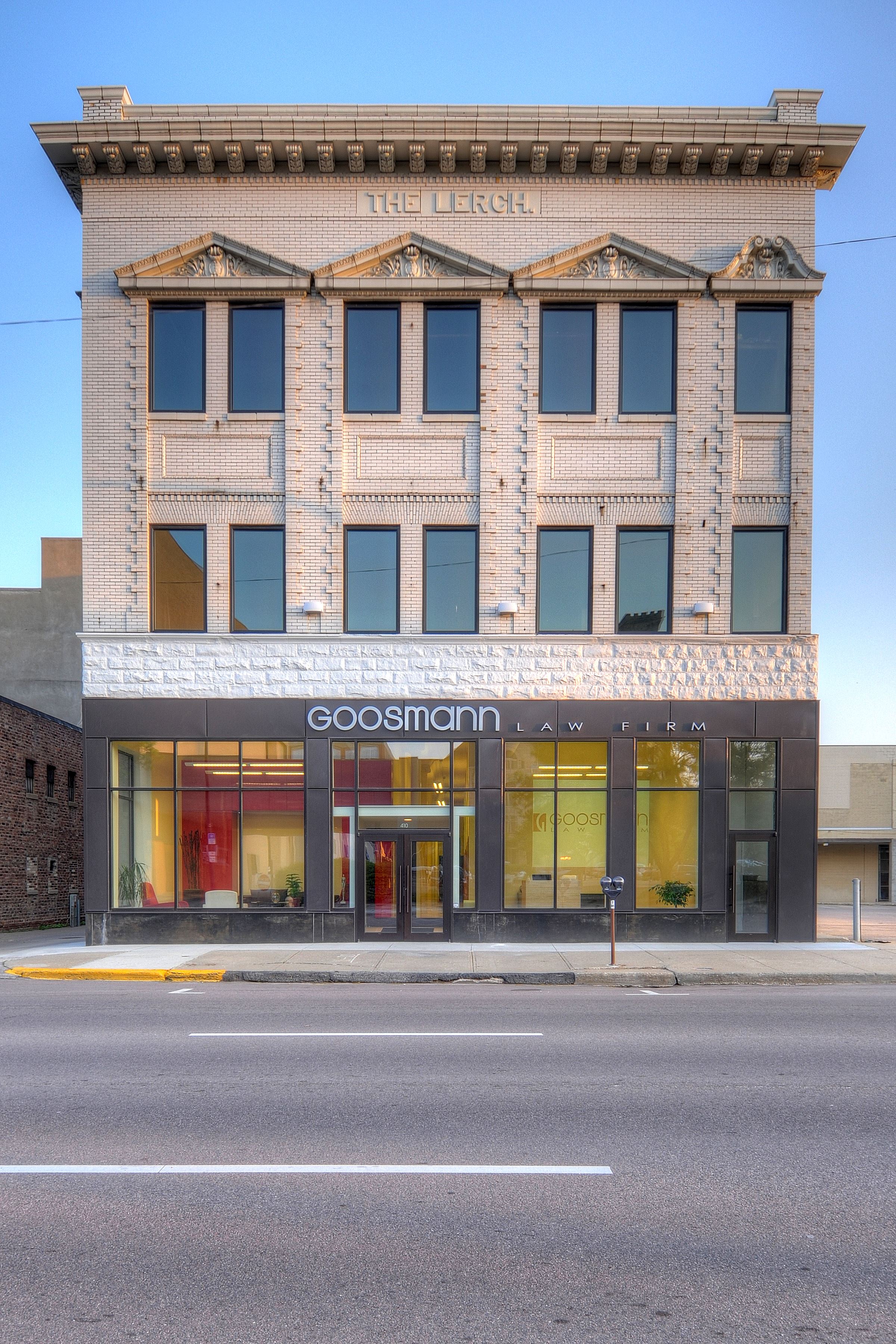 According to the history of Western Iowa, the first steamboat came up the Missouri to Sioux City in spring of 1856. Steamboats, known as “mountain boats” went up the river with goods, supplies, and a few passengers and brought back valuable furs. The demand for goods from military post and mining camps further up the river increased which stimulated Sioux City growth. When the railroad reached Sioux City in the 1860’s it became the new northern-most port for mountain bound steamboats. William may have been a crewmember of such a boat and as a result of a winter’s stay he may have decided to make Sioux City his home.

In 1868 at age 27, he settled in Sioux City. William Lerch began investing in Sioux City real estate in late 1870 at age 29. At that time, Sioux City was being touted as “the new Chicago” with an unlimited future. William concentrated his real estate acquisitions in the downtown area. Eventually, among his downtown holdings, he acquired most of the block bordered by 4th, Douglas, 5th, and Pierce streets. He built the “Lerch” building and others facing 5th Street and lived on the second floor of another building facing 4th Street. The 1880 Federal Census listed William as a self-employed dealer in Milwaukee beer. The 1890 census listed his occupations as “Capitalist” and the 1910 Federal census listed William’s occupation as “Real Estate.”

William died of pneumonia in California April 9, 1926 at age 85. Both William and his wife Clara, as well as most of the children are buried in Graceland Park Cemetery, Sioux City, Iowa. In 2012, Goosmann Law Firm renovated the historic Lerch Building located at 410 5th Street in downtown Sioux City. Now, the Lerch Building proudly displays a notable icon in downtown Sioux City - the We (heart/love) Sioux City logo painted on the West façade. The design for the building incorporated a combination of historic and contemporary states and includes full renovation of the three-story exterior. In 2015, the Goosmann team began to outgrow the first level space and renovated the firm’s second floor, once again incorporating modern designs with the historic charm of the building. 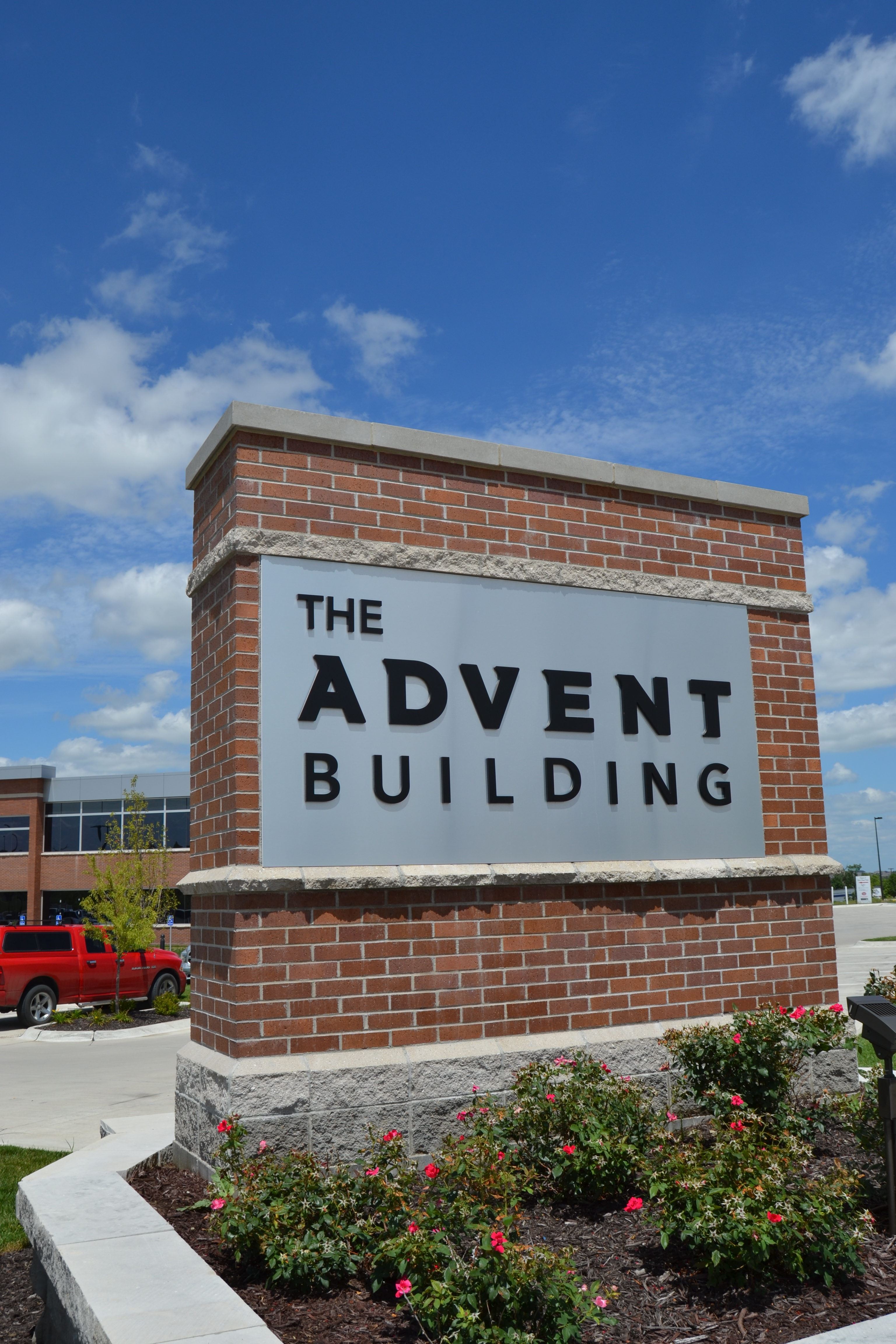 The Firm joined other Omaha businesses in the innovative and newly built Advent Building located in West Omaha in July of 2017. In July of 2018, the Firm expanded and renovated the Omaha office. The space boasts 8,000 square feet and includes 16 attorney and executive offices, 9 paralegal and administrative staff collaborative spaces, as well as 3 state of the art conference rooms complete with the newest telecommunications and conference technology. The firm features a modern lobby and seating area paired with a state-of-the-art coffee bar, tall ceilings and hallways, large windows, and a large breakroom perfect for hosting firm events, meetings, seminars, and group lunches. 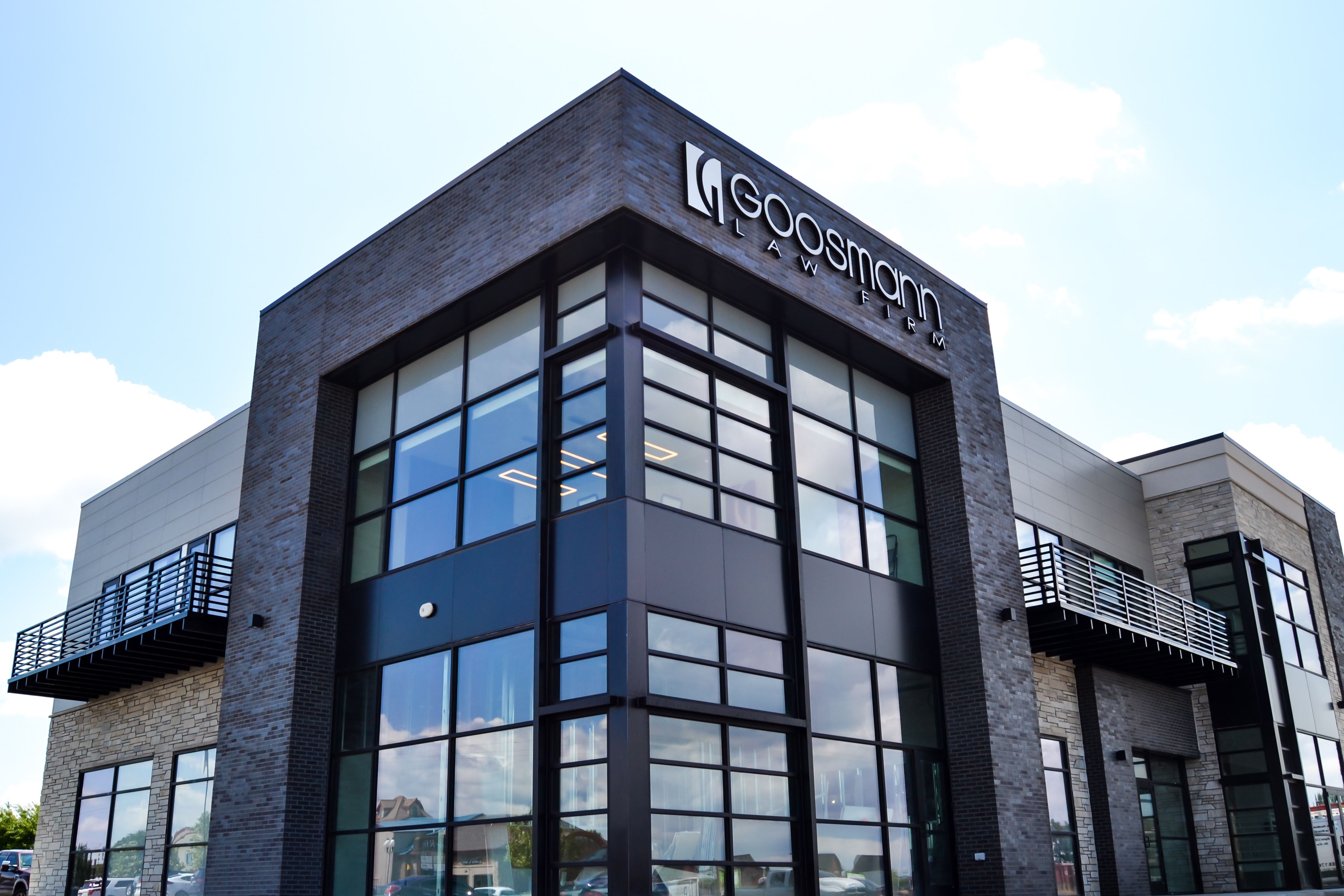 Goosmann Law Firm was the first business to commit to space at the new Prairie Hills Galleria, a new mixed use project at 69 Street and Western Avenue. The team moved into the new space late spring of 2019. The Prairie Hills Galleria building fits the firm’s brand with clean and modern lines and elegant professional design. The office reflects Goosmann’s culture of teamwork with collaborative workspaces and bright innovative design. The space features red accents and fresh surprises rarely found within the legal industry. Their office lobby includes a coffee bar and their team welcomes visitors to stop by for a great cup of coffee and a tour.

THE MERGE OF SACKETT LAW FIRM 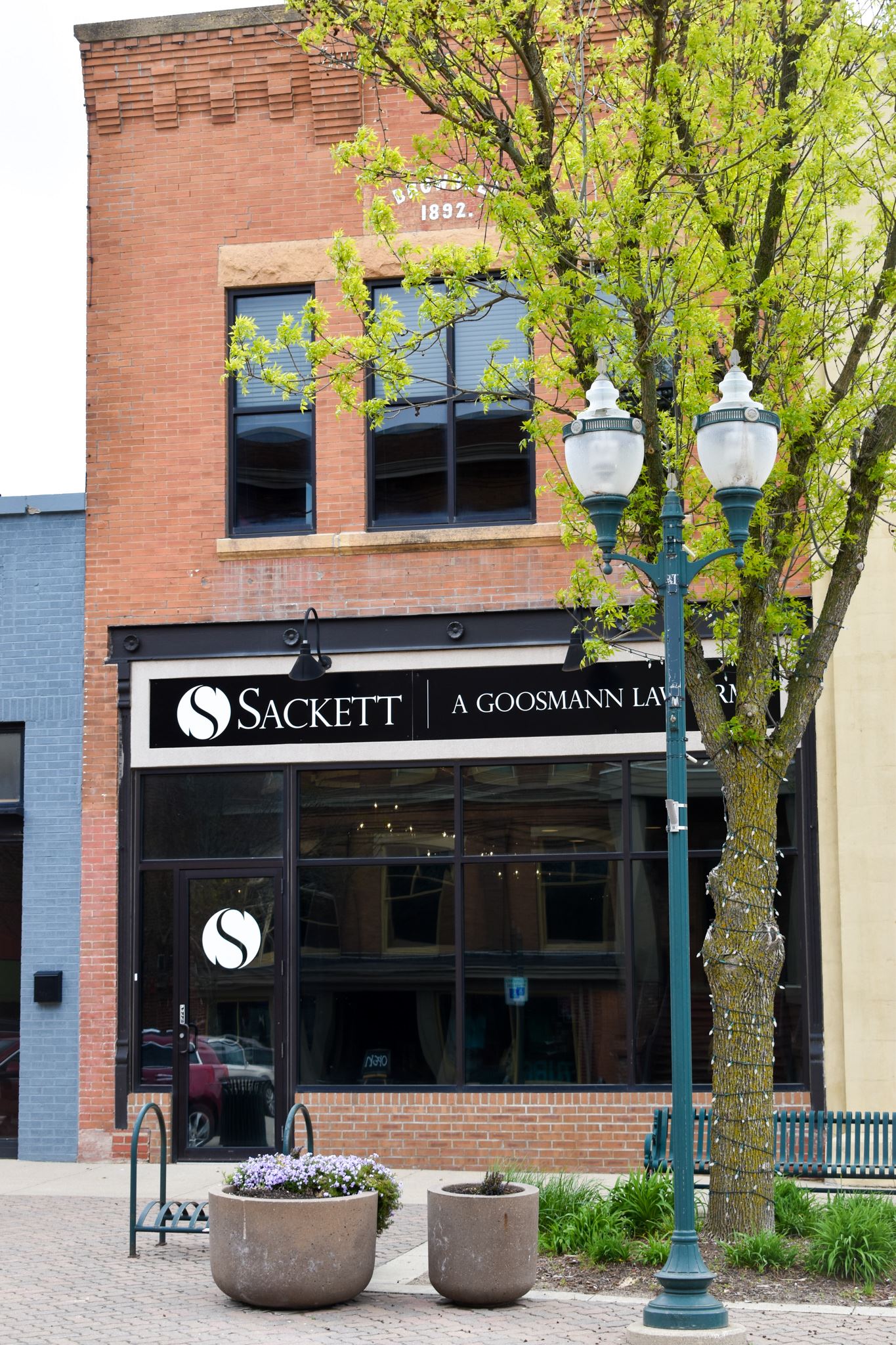 In March 2021, Sackett Law Firm Merged with Goosmann Law Firm making it the firm’s fourth location. The office is located in the quaint Olde Town of Spirit Lake on historic Hill Avenue. The downtown of Spirit Lake holds history at every turn, including the beautifully restored building that is the newest office of Goosmann Law Firm. This office features beautiful woodwork and tall bookcases that take you back in time.